Engineer Luigi Stipa can certainly be included in the select number of maverick Aircraft Designers that Italy has produced, as he foresaw, as early as 1931, the possibility of jet propulsion that he tried to interrupt in an emanatory way. Luigi Stipa was born in Appignano del Tronto on the 30th November 1900 and from his family farming background he learnt the philosophy of hard work that he was to apply throughout his life. Following his natural inclination for practical
application he enrolled as an Aircraft engine fitter during WW1. At the end of the war he returned to his studies and graduated in Civil, Hydraulic and Aeronautic Engineering in 1924 and 1927. In 1928 he enrolled as NCO in the Regia Aeronautic to reach, eventually, the position of the Air Force Engineering Division General Inspector.

His background in hydraulic engineering convinced him of the possibility of successfully using hydrodynamic principles for aeronautical applications and, after 5 years of development, Stipa submitted to the Technical Division of the Air Ministry a design for a twin engine land/sea plane fighter. The Regia Aeronautica examined the proposal and funded the construction of a single engine two seater ducted fan prototype.

Caproni built the Aircraft, as per the Regia Aeronautica requirements, at their plant near Milan in 1932. The unusual design caused a number of sceptical comments and the original design intention of increasing the efficiency of the propeller by reducing the losses was generally misunderstood.

The wide fuselage was practically a tunnel with a profile similar to the wings. And could have been considered to be a "circular wing". A 120 HP Gipsy III engine was mounted inside (left) a tapered duct driving a two-blade tractor propeller, in effect utilising the Bernoulli Principle related to fluids moving in a venture duct. Stipa idea was, in fact, a step towards the achient of jet propulsion.Princetown University Press published "High Speed Aerodynamics and Jet Propulsion" in 1959 and in Vol. XII stated "The Stipa Aero plane built by Caproni in 1932 should be classified as a Jet Aircraft.

'The Stipe Aero plane can be considered as a predecessor of the Jet Aircraft of today".

The Test Pilot, Domenico Antonini, took off for the Test Flight at Caproni Taliedo on October 7 1932. His report was quite favorable, stating that "the take off was achieved easily after a 180 m run."

The plane climbed easily and without vibrations, in level flight the Aircraft exhibited an exceptional stability. Antonini reported, "It is difficult to make the Aircraft move from the flight path." Landing was normal using approximately the length of runway used for take off. The Regia Aieronautica took over the Test Program; with the Aircraft having been transferred to the Test Flying Squadron based at Rome- Vionteceiio. The Regia Aeronautica Test Pilot, Olivari, confirmed the original Test Flight data and recorded his surprise at the minimal take off and landing runway required by the Aeroplane. He also underlined the unusual ratio of 1.96 existing between the minimum and max speed, at the time comparable only to the Fiat A.S.1.

The Regia Aeronautica however, decided that the advantages of the duct fan were not sufficientto continue with the development and the project was dropped. Stipa was called to France in 1938 to develop his "Stipa 203" fighter, but the start of WW II ended this project. He patented the principle of the pulsating jet engine in 1938 in Italy, Germany and the United States and remained convinced to his death in 1992 that the Germans used his patent to develop the V-1 engine. 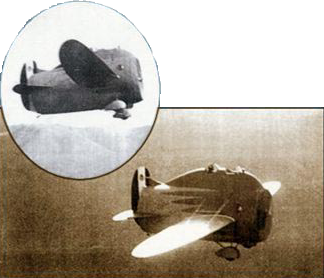